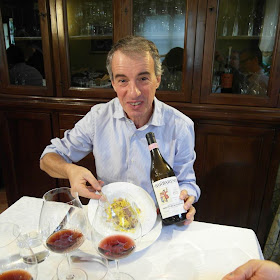 Our first stop this Monday on the Langhe Harvest Trail was Barbaresco. Aldo Vacca, director of Produttori del Barbaresco, had just finished the harvest and the wines were fermenting. I’ve never seen a more relieved Aldo. “2012 harvest is safely tucked in the tanks – let’s go eat lunch.” Not one to argue with Aldo when his winery is across the street from one of my favorite trattorias in Italy, Antica Torre.

Over an impeccable plate of carne cruda (with no truffle oil, America) and followed by a plate of tajarin with shavings of white truffles, Aldo started us with a bottle of his 2011 Langhe Nebbiolo. If that wine is any indication of the harvest we are in for a treat when the classic Barbaresco is released followed by the crus.


But first things first. Aldo brought out his last bottle of the perfectly drinking 1990 Paje’ cru. No one was drinking better than us in the restaurant that day, even Angelo Gaja’s daughter, who was at a table nearby.

“We’re just getting into truffle season,” Aldo grinned. “And the porcini (mushrooms) this year have been amazing. They are usually an indication of good things to come for the truffles.”

So we had a workingman’s lunch with all of the above. Gerald, everyone says hello back to you. 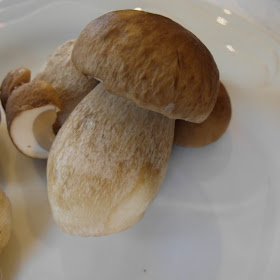 Our hosts brought out a platter of the mushrooms to show us their vigor. “Feel how firm they are.” I must admit, those were some stiff ’shrooms. And I will leave the inevitable jokes to the Americans just waking up.

The Paje ’90 (Aldo’s last) and the tartufi bianchi (Aldo’s first of the season) marked a successful harvest and a reason to pause and to thank the powers that be that we are in such a great biz and one of the great wine producing areas of the world. So Aldo and I and our colleagues are gloating – just a little.

To earn his keep, Aldo makes a mean espresso. What a guy! What a wine!! What a place!!!  Barbaresco – one of my favorite places in the universe. 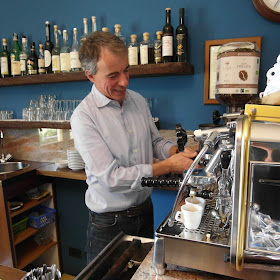 Anonymous commenters go straight to the spam file. Sign in and leave your (real) name. Thank you